Although it is their first time participating in Braille Across America, Team Francis has a long history with the National Braille Press (NBP). The team’s leader, Susan Ierardi Clark, is the granddaughter of Francis Ierardi, founder of National Braille Press. The other members are James Kenyon and Corey Kenyon, Francis’s great-grandsons, and Cappy Temple, his granddaughter-in-law.

After receiving an email about Braille Across America, she reached out to family members to put together a team.

“This is the first year I’ve done a fundraiser like  Braille Across America,”  Clark said. “I send a contribution each year because it’s my family.  For a long time, I was a single mom with very limited resources and there was little to send.  I had no time, but now I’m retired so I have more freedom.”

Although the team is named Team Francis, Clark feels that Francis’s wife, Laura Sterling Ierardi should get some credit for the NBP’s success as well.  Clark’s younger sister is named Laura, in her memory.

“I think a lot of what [Francis] accomplished was because of my grandmother [Laura], and she doesn’t get that recognition,” Clark said. “She was in a much quieter way a remarkable woman.  She came to this country in the very early 1900s by herself.  She took a train to Boston. That took a lot of courage. She was a working single woman before that was acceptable,” Clark added.

“She would have been called a ‘spinster,' but she gave my grandfather a lot of support and made it possible for him to accomplish what he did.”

An immigrant from Italy at the age of two, Francis was born sighted. His journey to creating the Braille Press started when he was 12 years old, playing around in a construction site with a friend.  They were smashing sticks and didn’t realize that one of them was dynamite.

Francis Ierardi attended the Perkins School for the Blind in Boston, Mass.  He met Laura, his future wife there,  and was also there at the same time as  Helen Keller.

“[Francis] was younger but there were a few years [he and Keller] crossed,” Clark said. “Helen Keller was winning awards. There was a ceremony with a raised platform and some people involved were sitting there. Helen Keller walked to Francis and shook his hand and said ‘how are you.’ She was able to tell who he was just by the feel of his steps on the wood.” 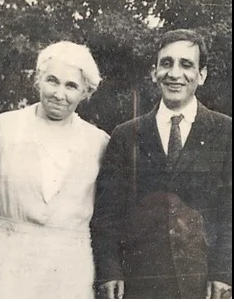 Laura Sterling Ierardi would read the news to Francis every night. This eventually led to Francis Ierardi creating the National Braille Press.

“[Francis and Laura] were very news-oriented, and it was important to him that the news of the world be available to those who could not read it,” Clark said. “They did not publish books, it was just a weekly news magazine.”

Francis and Laura lived in West Somerville. When Susan Clark would visit them, she would sometimes visit the Braille Press. She said the other people working there were like ‘extended family.’

“The Press has always amazed me,” Clark said. “It amazed me what my grandfather could do. He never came across as a person whose life was limited because he was not sighted. He never used a white cane or a seeing-eye dog.  He was very independent and didn’t want to rely on anything. He would use public transportation to go to work,” she added. “His initials were FBI and he used to laugh because everyone would stay away from him [as he had his initials on his briefcase].”

The technological progress has amazed Clark as she saw the way that Braille materials were produced throughout the years.

"These days," she added, "The process of braille printing is a lot simpler than when she used to visit the Braille Press. The presses themselves scared me [as a kid],” she said. “They were these gigantic machines that were very loud. They would punch holes in the thick paper. I don’t know how they managed to run the presses but they did.”

Susan Clark was a middle school reading teacher before she retired, and she would show Braille materials to her classes. She said she tried to learn Braille herself, but could not get the hang of it.

“There was a book I used to do with my classes and one of the characters was blind, [it was Things Not Seen by Andrew Clements], and I’d get materials from the Press,” Clark said. “We did a unit on what it would be like to be blind.”

Clark said reading is one of her favorite things, and she was raised in a family that believed in the importance of books. She wants that joy to be available to everyone.

“Every birthday, every Christmas, you’d get a book,” she said. “I was brought up to love and respect books. I have to imagine that my father got that from his father and mother [Francis and Laura], and passed it along.  He was a book editor. Not the same as his father but in a similar field.”

Team Francis is now part of the legacy of the Ierardi family and the National Braille Press.  Clark said that besides making the team in Francis’s honor, she understands that it costs more to create braille books than print books, and hopes that more people will support NBP.

“The role of the Press has grown tremendously since my grandfather’s days and I hope it continues to grow because the need for it will never diminish,” she said. “I hope that there always is a National Braille Press. Aside from my personal interest, I just think the world needs it.”

We love hearing from our blog readers, please leave comments below.